Surfing and Snorkeling at Abasi beach

by Charles Roring
I have written several articles about surfing at Abasi beach in this blog. As a matter of fact it is not only wave surfing that visitors can enjoy but also fishing and snorkeling. The coral reef below the surface of the water is still in very good condition. Tourists who cannot surf will find that snorkeling in Abasi is fun. There are a lot of species of fish that can be seen.
This afternoon, I went snorkeling in a place where there are no waves. I brought with me a new camera - Canon Powershot G1X. When I reached a depth of approximately 2 to 3 meters, I saw staghorn and table corals. Butterfly fish, striped surgeonfish and convict surgeonfish also thrive in the reefs. When I was in the water, there were so many children around me. I could not easily take pictures of the fish and reefs. Perhaps the fish moved away from me because of our too many movements in the water. 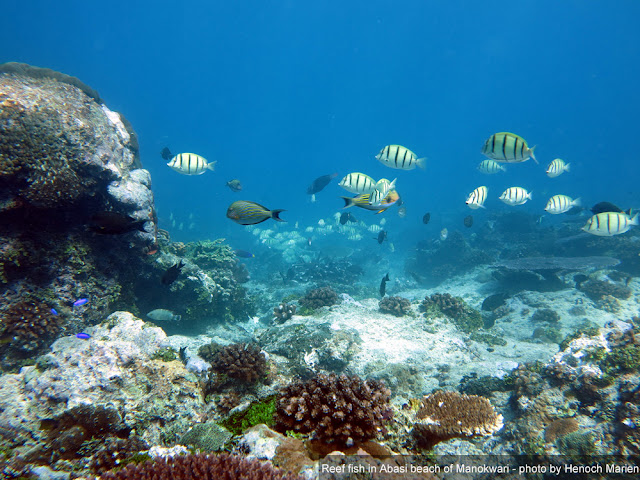 After spending around half an hour snorkeling and trying to take some underwater pictures, my friend came. His name was Henoch Marien. He was a wavesurfer who accompanied some guests from SurfExplore team early this month. I decided to give the camera to Henoch who is also called Olof. Before that I had to give him some explanation on how to use the digital camera. Henoch was very excited when receiving the camera. He swam into a deeper water and dived to the bottom of the sea. I was amazed to see that he could stay underwater for quite long and remain calm. He took a lot of pictures that I thought impossible to be taken without wearing a diving gear. He reached a depth of around 6 to 10 meters and shot a schooling fish of convict surgeonfish, bannerfish, damselfish. He took the picture without using flash. Yet, the quality of the photographs was excellent. At around 4 p.m. I told him that we should return to the beach because I was tired.
We took a rest for a while at a hut that was built for surfers to watch the waves. We discussed about the promotion of Abasi beach not only as a surfing destination but also as a snorkeling one. He agreed with my opinion.
He still went to the sea again with his surfboard. I tested the digital camera again. This time was for distant subject. Unfortunately, Canon Powershot only had 4x optical zoom. Combined with digital zoom, the magnification could reach 16x. I helld the camera firmly while aiming it at him. The following photograph is the result that I got when I pressed the video button. I had to open the video in my computer and pressed the print screen button to capture the moment. Then I cropped unnecessary frames and save the photograph as a jpg file using Adobe Photoshop software. 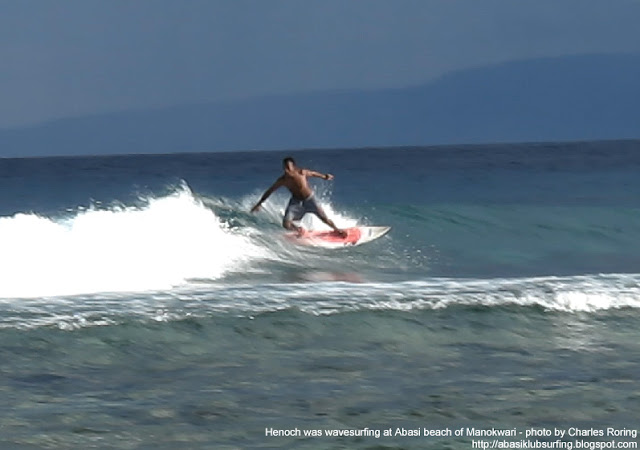 I, Salo, and the native Papuan villagers in Abasi beach want to develop this beach as a destination for responsible tourism - a scheme will bring improvements to the standard of living of the local people and at the same time preserve the coral reef and the surrounding marine environment from dynamite fishing. Surfers and snorkelers will be served by the villagers during their tour in Manokwari.
Manokwari is the capital of West Papua province. It is a famous gate for birdwathers and nature lovers who want to go trekking in Arfak mountains. Most of them go there to watch birds of paradise. The introduction of Abasi beach as surfing and snorkeling sites are still a new thing to most of the visitors. We hope that more tourists will visit Abasi in the near future.
If you are interested in taking a snorkeling or wave surfing trip in Manokwari, please, contact us by email to abasiklubsurfing@gmail.com. We will be happy to give detailed information about eco-tourism in Manokwari, arrange your trip and provide guiding services.