Surfers who ride the barrel waves of Cape Bakaro during sunset hours will have to smartly adjust their take off position while facing the sunlight. For photographers, taking pictures of their friends riding surfboards at sea can be fun because of the contrast colors which they will get. But for the surfers, it is a daring moment. So, Cape Bakaro is not for beginners. The recommended site for them is the nearby Abasi beach. The person on the following photograph is Hayato Maki, who visited Manokwari early this month. He is an experienced surfer who came from Japan. I took this picture of him using a compact point and shoot camera, Nikon Coolpix P500 that was powered with telephoto lens. Today, Nikon has released a better and more powerful photographic device for budget travelers, i.e. the Nikon COOLPIX P520

. The 18 megapixel digital camera is powered with 42x optical zoom (lens focal length is equivalent to 24 - 1,000 mm lens in 35 mm format). Taking pictures of surfers who ride barrel waves at sea can easily be done in sports mode. 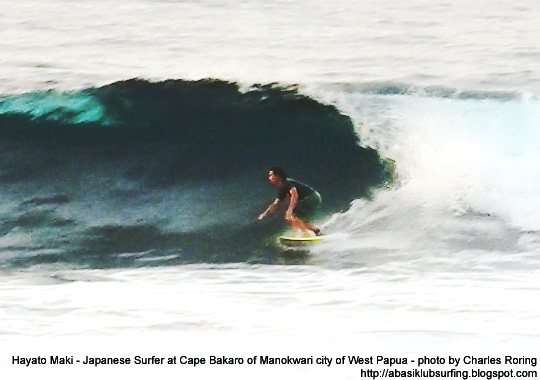 There are always waves at Abasi beach and Cape Bakaro all year round. These sites are relatively unknown to most of the surfers around the world. Some native Papuan youth who live in Abasi beach are willing to share their beach with any guests from any corners of the globe. Contact Salo Rumadas, the sponsor of Abasi Klub Surfing by email: abasiklubsurfing@gmail.com if you plan to visit Manokwari city.
Diposting oleh Abasi Surfing di 18.30