Two weeks ago I received an email from Matt Fox, the project manager of CII for West Papua province of Indonesia. He said that he would come to Manokwari and interested in surfing. One week later he arrived in Manokwari. On the first day, I brought him to a lift-net bagan in the middle of the sea where we saw fishermen catch fish and enjoyed some grilled fish there. Then I arranged his morning surf at Cape Bakaro. Matt is an Australian. He was the only tourist at the beach that morning. Accompanied by a local surf guide, Matt rode the morning swells of the cape. 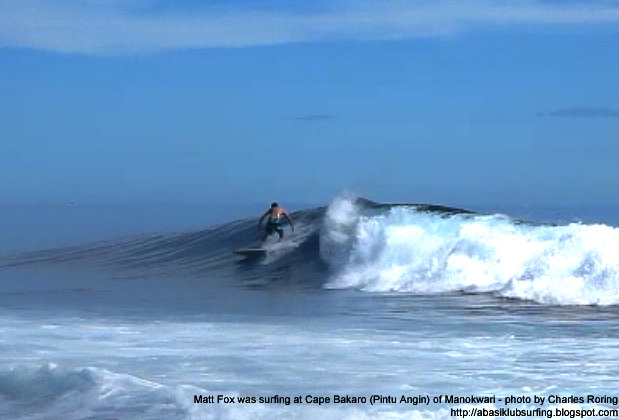 There are a lot of Australian surfers at Kuta beach of Bali island but very few of them go to Manokwari of West Papua to surf at this cape. I hope that more surfers will come to this city to enjoy surfing. Cape Bakaro is also called Pintu Angin (meaning the Gate of the Winds). If you are interested in surfing, snorkeling or hiking in Manokwari, please contact us at abasiklubsurfing@gmail.com
Diposting oleh Abasi Surfing di 06.46