Surfing at Cape Bakaro of Manokwari 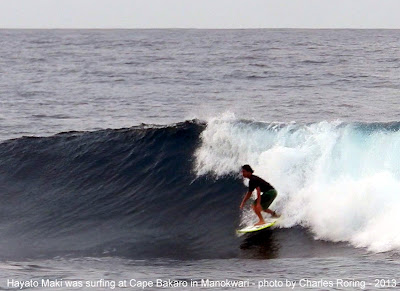 The Cape Bakaro in Manokwari city of West Papua is a recommended destination for surfers. The waves there are high all year round. Last week a team of international surfers went surfing in the afternoon. They were accompanied by members of abasiklubsurfing.blogspot.com. It was around 5 p.m. when Hayato, Beto and Phil were riding the waves.
One of our club members, Olof, also went into the sea but he had to return to the beach again after his rope was broken.
Cape Bakaro is also called Pintu Angin (or Wind Gate) by the nearby villagers. It has been considered as the best spot in Manokwari only for experienced surfers due to its wave heights. Surfers need to bring their own boards when traveling to Manokwari.
Manokwari regency has got a long coast line its north and south east coasts facing the Pacific Ocean. Wavesurfers who plan to visit Manokwari for surfing can contact Salo Rumadas (email: abasiklubsurfing@gmail.com). She can provide further information about surfing and other activities that visitors can enjoy while traveling in Manokwari.
Diposting oleh Abasi Surfing di 19.22