For most of the beach goers in the world, wave surfing is sport. But for Phil Goodrich, it is a great source of art inspiration. Phil and his friends from SurfExplore team visited Manokwari in late February to early March 2013. They spent most of their time exploring the north coast of the bird's head region of Western New Guinea in search of barrel waves. The successfully found several spots where no surfers had even been before. Some local youth from Abasi beach who accompanied their trip were glad to surf with them. It was a rare opportunity to learn new techniques from experienced surfers from the SurfExplore team.
Phil Goodrich is a prolific artist. His paintings are mostly about seascape, surfers, barrel waves and anything or anyone that is related to beach life. 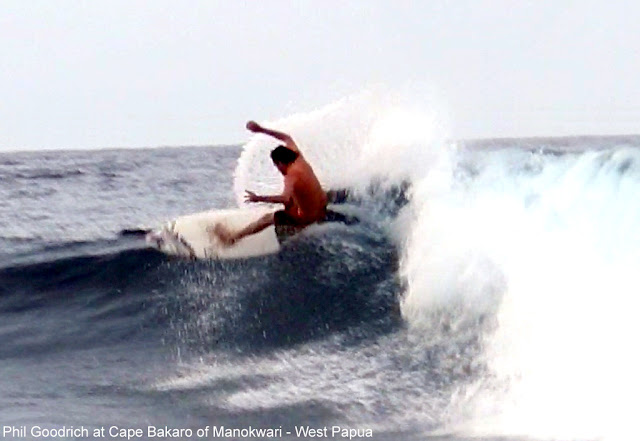 Phil often shows children, villagers and beach girls in his paintings that he see during his surfing exploration in Indonesia and other parts of the world. Anybody who is interested in buying his artworks can find him in Facebook or his official website: http://www.philgoodrich.com. Before leaving Manokwari for Mentawai, Phil made an artwork of a barrel wave for Salo Rumadas, a personnel of Abasi Klub Surfing. For Phil created the painting using oil on canvas, an unusual media for him. Most of his artworks are oil on wood. Members of Abasi Surfing hope that they can meet him again one day.
Diposting oleh Abasi Surfing di 02.04